Ph.D. at Baylor University in the USA

Barbora Suchanová has been awarded the UPE scholarship

This year, 39 UPE members have been awarded the UPE scholarship, and $50.000 has been distributed amongst them. Our president, Barbora Suchanová, has been amongst the most successful ones as she has won the Dan Drew Award worth of $2.500. Congratulations!

Triumph of our members at Microsoft Imagine Cup

A Czech team, involving our president Barbora Suchanová, triumphed in the prestigious Imagine Cup organized by Microsoft. Their X.GLU solution, designed to help people suffering from diabetes syndromes, secured them the first place in the tough competition of 54 teams that made it to the finals. Congratulations! Ladislav Prošek gave a great lecture at FEE CTU about his job experiences in Microsoft, Facebook, and Red Hat. He revealed to us the secrets of software development in these giant companies and gave a very interesting and entertaining talk. 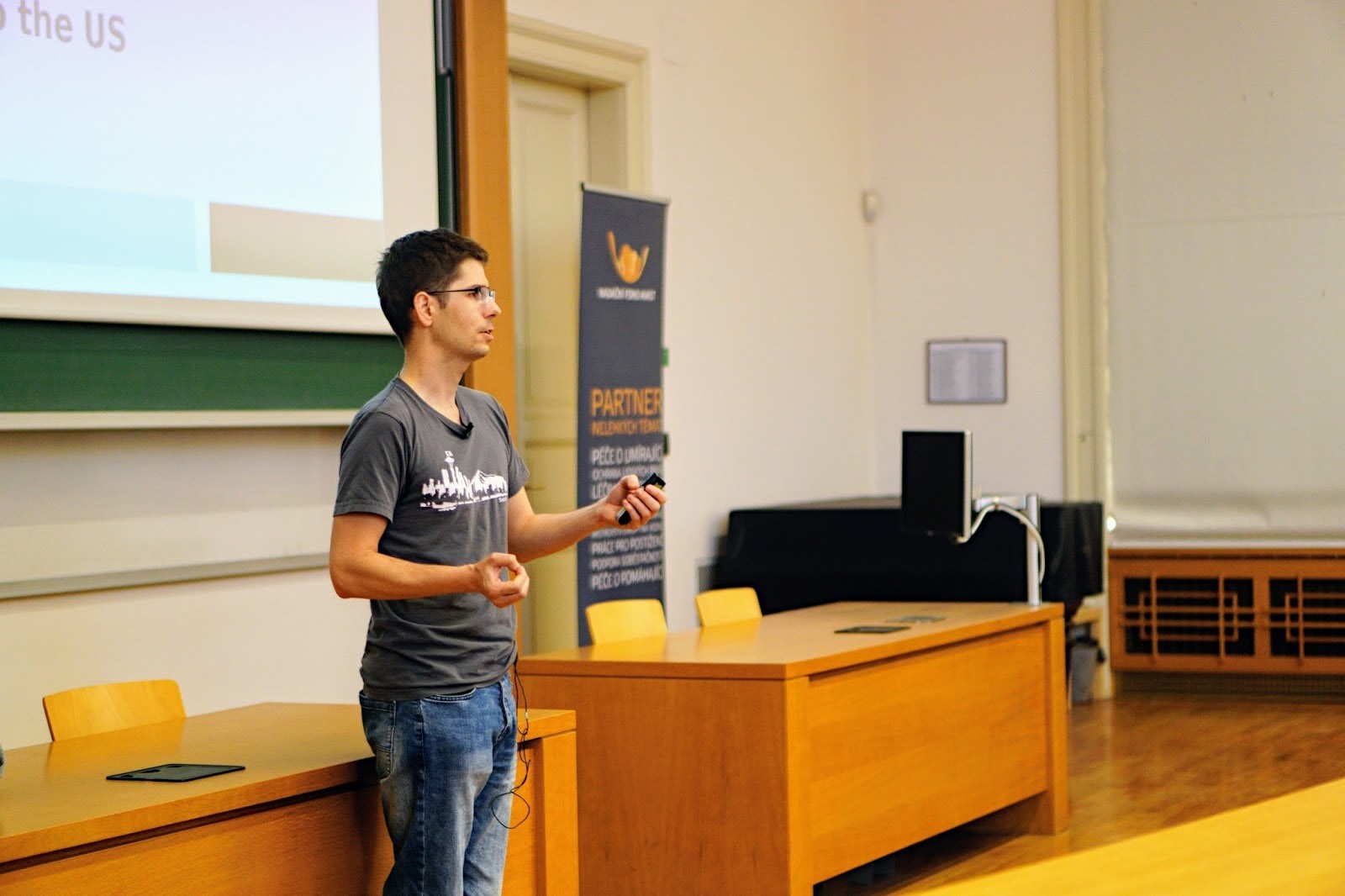 MBZIRC 2017: Drones from CTU won in the prestigious robotics competition

We welcome 21 new members who have joined our chapter during the initiation ceremony held at FEE CTU on January 16, 2017. Following the ceremony, the members of the chapter united on the dinner in the nearby Klub MAT.

Among 7 awarded chapters, from the total amount of 275 chapters, is our CTU UPE chapter. UPE is the honour society for students of computer science and informatics. The Honorable Mention Award grants our chapter with 250 USD and mostly allows us to present our activities at the annual UPE convention. Our chapter is represented by FEE student of Open Informatics, Antonín Novák. UPE supports 3 master students for RedHat-CTU Internships. Three months in Brno in the largest RedHat development center and three months of remote cooperation from CTU in Prague. We hope this is a good start for more similar opportunities for our students. The UPE Annual Convention was held in cyberspace hosted by Nova Southeastern University, Ft. Lauderdale, Florida on the 4th of January. The UPE Executive council members introduced UPE scholarship awards, new chapters chartered in 2013 and International Collegiate Programming Contest 2014 which will take place in Ekaterinberg, Russia. Next, the five outstanding chapter reports were presented by their chapter representatives. Our chapter was one of the top five chapters. Afterwards, new member of the UPE Executive council, Dr. Cathrine Linnes, was introduced and finally, Dr. James Comer was awarded with the prestigious Abacus award.

Presentation of UPE in Brno

Members of our Chapter who are currently finishing studies are offered a job opportunity at Amazon Web Services. Especially in Identity & Access Management team in Seattle, Washington and possibly in Los Angeles, California in the U.S. For more information please contact our Faculty Advisor Tomáš Černý.

Master's degree in Texas with scholarship

Students from our ranks, who are interested, can apply to study at Baylor University in Waco, Texas. One would need to be able to communicate in English and the university requires applicants to undertake GRE test. One could receive full scholarship and teacher assistant job. For more information please contact Tomáš Černý.

Our Chapter in Czech Television

Our Chapter's second initiation ceremony has made an appearance in the main evening news of a public television broadcaster Česká televize (Czech Television) on the main channel ČT1. Furthermore, our Faculty Advisor Tomáš Černý and visiting Ex-officio from Texas, James Comer, have been interviewed in the TV show Studio 6 on a news channel ČT24. You can visit a web page (in czech) dedicated to the report. You will find there both of the recorded TV footages and a short article. For the whole footage of the news, see the archive of Czech Television.

On the 9th of January of 2014 will be held the second initiation ceremony of the Czech Alpha Chapter of UPE at Czech Technical University in Prague. The ceremony will take place at CTU, Faculty of Electrical Engineering, Karlovo náměstí 13. For more information follow the flyer.

Our two members, Petr Smrček and Petr Ryšavý, receive a prestigious scholarship to study at Baylor University in Waco, Texas. It is an honor for our chapter to join such excellent students together and watch their success in the world. Congratulations!

UPE is happy to invite you to a lecture about Internships and about great success of company Avast with free software. Our member Tereza presents experiences from 9 month long internship at Google in Munchen, Petr presents his experience from studies in Sweden and about is preparation towards his PhD there. Last, but not least speaker is a marketing director of Avast, who gives a talk about a great success of the Avast! Free Antivirus. In his talk he shares experience with free software business, with no penny spent on an advertisement. The session is held on the November 18th, 2013 at Karlovo Namesti in room KN:E-107 at FEE CTU. The talk will be in czech language and here is the invitation flyer.

Each summer the Executive Council of UPE evaluates a number of outstanding scholarship applicants at both the undergraduate and graduate levels. All scholarship applicants are required to complete a comprehensive application form which requires each applicant to attach all college-level transcripts, UPE adviser recommendation and statements from applicants related to their contributions to their respective UPE chapters and related student activities at their university, as well as their long-term plans for the profession.

Our Vice-president Karel Cemus was selected to receive the UPE Scholarship Award for 2013! Congratulations!

The day schedule and list of lectures can be downloaded here.

CTU Students in a World Elite

Ekonom.ihned.cz and Open Informatics on CTU wrote and article about our chapter foundation! Both links are in czech.

In January of 2013 held the first induction ceremony of the Czech Alpha Chapter of UPE at Czech Technical University in Prague. For more information follow the flyer.